Footgolf is a precision sport, in which players kick a soccer ball into a cup in as few shots as possible. The name is a portmanteau of football and golf and the game combines the two sports, being more closely related to golf.

The game is played similarly to golf, with the exception that players use a soccer ball instead of a golf ball, and the ball is kicked rather than struck with a club, working toward a 21-inch “cup” in place of the usual golf hole. The player who finishes the course with the fewest shots wins. Indeed, footgolf is often played on golf courses, though it may also be played on specially built grass footgolf courses. The first shot has to be played from the tee box, and bunkers, trees, water and hills must be crossed or avoided in order to reach the hole.

A game with roughly similar rules, codeball, attained brief popularity in the United States during the late 1920s and 1930s. Swiss players have been playing a variation of the game since the late 1980s, and the Scandinavian countries starting playing the game under different names and rules in the 1990s. Michael Jansen and Bas Korsten were the creators of the Footgolf uniform and basic rules, and also organisers of the first tournament played the way the sport is played today around the world, and they officially launched FootGolf in the Netherlands in 2008. They learned of the sport from Korsten’s brother, Dutch footballer Willem Korsten, who recalled playing a similar game during his time with British club Tottenham Hotspur between 1999 and 2001, where players would end training sessions by kicking the ball from the pitch back to the changing rooms in as short a time as possible.

How much is it to play?

What are the Rules?

If the ball lands in a water hazard, you receive one penalty kick. To proceed:

Out of bounds / unplayable

If the ball is out of bounds or unplayable, you receive one penalty kick. To proceed:

Where a bunker is under water, the player may take a drop – no penalty.

Do I have to book in advance?

We only require bookings for birthday parties, corporate events and any other large groups (10 people or more). All others can play without booking so no need to call us, simply turn up and play.

Where are you located and how can I get there?

From Arthurs Quay in Limerick City drive towards Corbally. At the roundabout by Grove Island take the 1st exit onto Corbally Rd/R463, continue for 3.3km and we are located directly across the road from Corbally Soccer pitch. Click here for more accurate directions from your current location.

My child is 5, is it suitable for all ages groups?

Yes, the course is designed to be suitable and fun for all ages.

How long does it take on average for one round?

One round is approximately 60 to 90 minutes.

What are your opening hours?

We are open 2pm-daylight hours 7 days a week for all Fun Footgolf. (Please note: last entry to the course is an hour before sunset)

I have never played golf before. Will I be able to play?

Of course! Our skilled and friendly staff will show you how!

I want to hold my kid’s birthday party at your venue. Can I have more information? 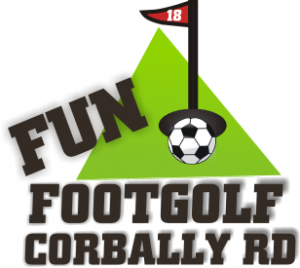 Copyright © 2020, Seanchoill Sports Complex, All Rights Reserved.
Back To Top